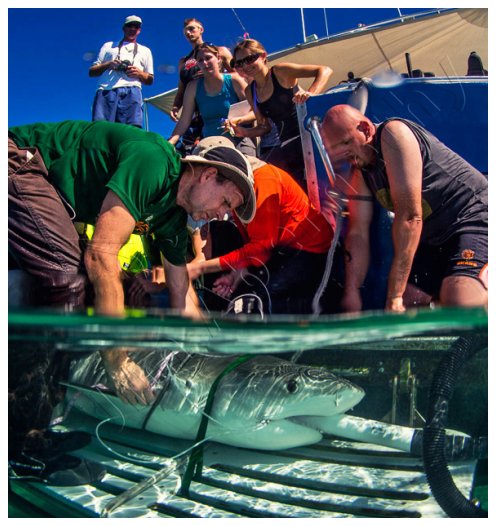 Sharks and Sea Turtles are among the most poorly understood and enigmatic species on the planet. Working with sharks, such as this tiger shark (Galeocerdo cuvier), we integrate studies of form with data on movement, health, and diet, to determine the causes of complex shark movement patterns.  We also work with partners to investigate the complex body shapes of sea turtles, and how they might affect swimming.

Together with Dr. Neil Hammerschlag from the University of Miami and the RJ Dunlap program, we am investigating how variaiton in body form, both within and among species, influences physiology and movement patterns in sharks. Sharks are among the most impressive athletes of the animal kingdom, and many sharks will migrate thousands of kilometers, which represent a significant energetic investment. As body form strongly influences locomotion in fast-moving and wide-ranging animals such as sharks, we are developing new methods for understanding the ecological significance of body form in sharks. One new avenue is a novel methdology (Irschick and Hammerschlag, 2014) for quantifying the "health" of sharks - this new method involves simple measurements of body shape that can be done quickly and non-invasively, yet has close links with independent measures of health, such as fatty acid levels (Gallagher et al. 2014). Over time, we are developing new methods of creating individual 3-D models for sharks, and modelling locomotion over long distances as a function of body form. Some of the shark species we work on include Tiger sharks (photos above, Galeocerdo cuvier), Bull sharks (Carcharhinus leucas), Blacktip sharks (Carcharhinus limbatus), and nurse sharks (Ginglymostoma cirratum), among others.  You can see one of our 3D sharks on the Digital Life website

In addition, we have begun a recent set of collaborations with Dr. Annabelle Brooks and Dr. Jeanette Wyneken to understand the complex 3D shapes of sea turtles, both among species, and within a species.  Sea turtle species vary among different age groups in their overall body form, and they also vary among species, but the nature of these differences is poorly understood given the lack of museum specimens.  Using the BeastcamTM technology we are using new techniques to understand these body shapes.  In turn, we are working with Blair Perot, a faculty member in engineering at UMASS Amherst, to help us interpret how such morpholgoical changes could affect swimming.